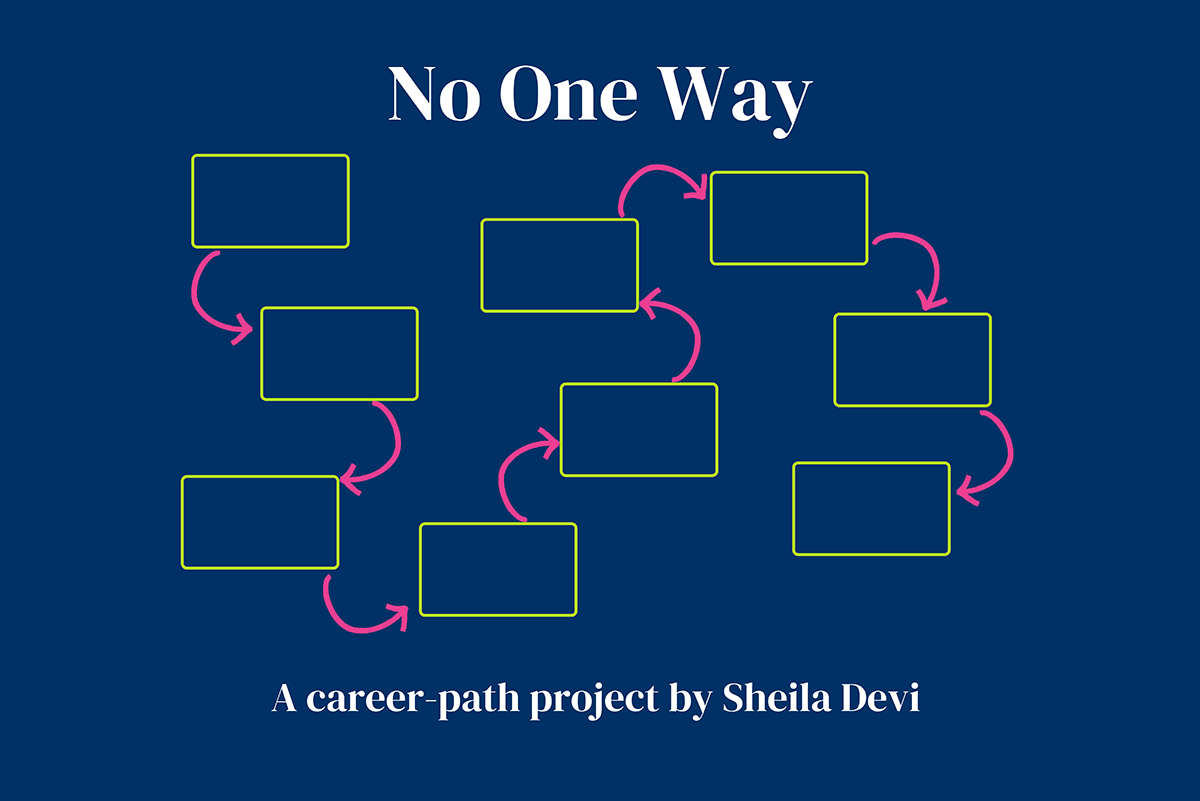 ~ I recently launched No One Way™ over in Instagram.

~ The project visually illustrates how people have really gotten to where they are now.

~ Every M/W/F, I post a new career sketch on IG. Every Friday, we do a deep dive into one of the sketches here. 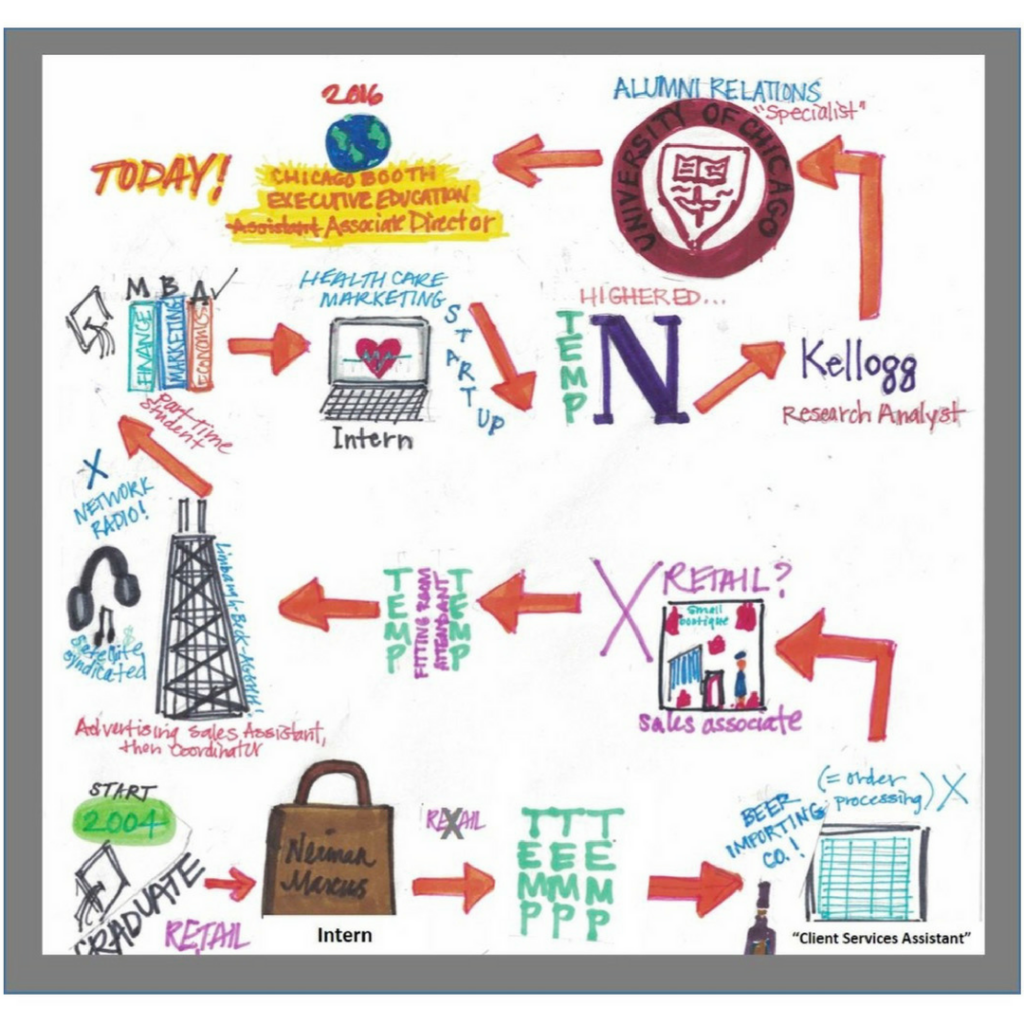 What felt like a “failure” at the time, that ended up being an opportunity?

Something that didn’t fit in my sketch was an attempt at a major career switch a little over a year ago, that didn’t pan out. I interviewed at an arts and crafts e-commerce site for an online merchandising position. It made some sense because it tied back to my original retail background, and it meshed with my personal hobbies. When I didn’t get the job I was devastated. I had had such a good interview and made a connection with the CEO. I even held on to the hope that he would reach out to me soon with another position. Looking back now, I know that I was so miserable in my job at the time that the possibility of this new job in a dog friendly office with a chef(!) felt like it was the answer, that it would rescue me. Even though I didn’t get this job, it was still such a rich learning experience, because I discovered I am capable of putting myself out there, and just that there is an “out there”, and I don’t have to stick in the industry I’m in because it’s what I’ve done for the last several years. Two to three weeks after the let down of not getting the sparkly cool job I found a voicemail asking if I’d like to come in for an interview at Chicago Booth. I scheduled it as soon as I could.

How did your early steps prepare you for your later ones?

My first unemployment phase (AKA a time for temping) prepared me for my second one 4 years later, because I knew I would get through it. I was in an even better place, with a newly minted MBA, but the reality of not having anything was still extremely scary. I am eternally thankful for my parents during both of these times for supporting me emotionally (as well as financially). Their belief in my potential really helped keep me afloat, both times.

What advice would you give your 20 year old self, looking back from where you are now?

I would tell my 20 year old self, it’s okay to not know what you want to do yet, or on a deeper level, who you are yet. Throughout college (and the next few years after I graduated), I feared that I didn’t have a future because I wasn’t on a clearly defined “path”, to law school or med school (both careers I had considered in high school, until I worked in a law office and took an anatomy course). I had picked a major freshman year because I thought I needed to have one. In retrospect, I wish I could have told myself not only is it okay to be undecided the first or second year of college, or major in something general like communications, it actually could have helped me be more open to more possibilities.

I would tell my 30 year old self, you’re only just beginning. When I turned 30 I was very single and in a job I didn’t care for. I hadn’t checked off any of the life accomplishments I thought I would have by then (Married, have a child or two, be successful in a job I loved). I still didn’t have a “plan” per se, but I am thankful that I was open to possibilities. This is the year I tried something new: improv(!), and became confident enough to say yes to a general Facebook post to attend a Bulls game with my crush (and now husband!). 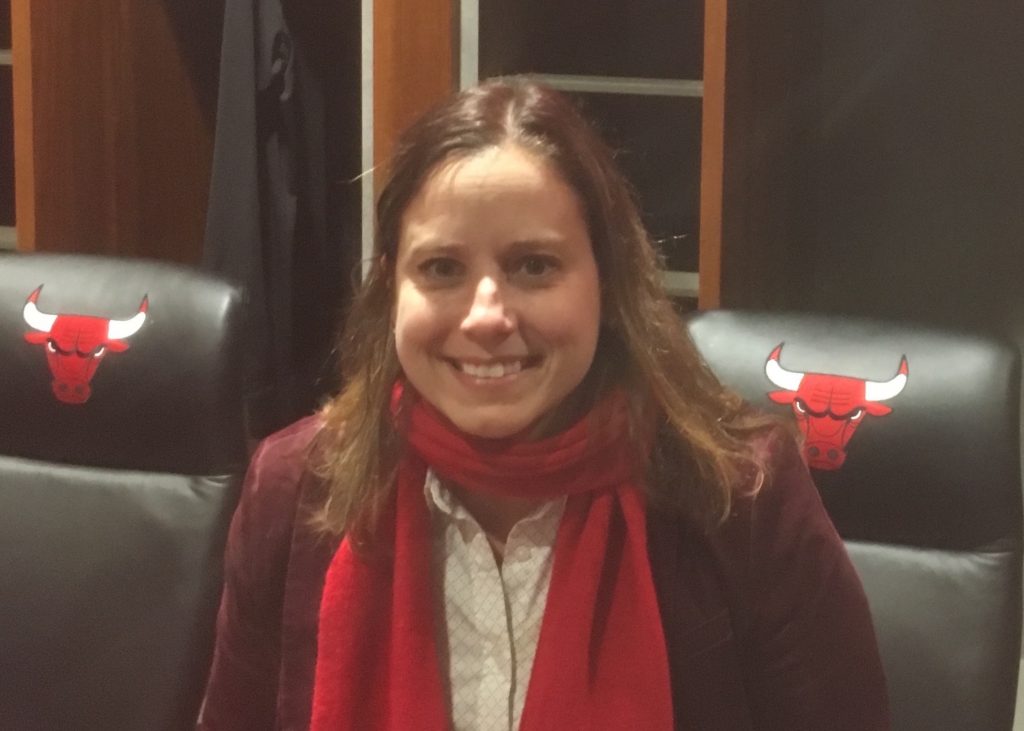 She helps smart, talented people who are frustrated at work because they feel like there’s something more out there for them. She helps them discover their best next moves ~ so they can enjoy work that uses their strengths, lights them up, and sets them up for an overall life they love.

Interested in coaching with Sheila? Email to set up a complimentary call.